Pangolins are the most heavily trafficked wild mammals in the world (Chandler et al., 2014) with the demand for live pangolins, their meat and scales, leading to a global decline in their populations. The declining numbers in the Asian populations has seen increased pressure in the African populations and the Temminck’s Ground Pangolin (a species indigenous to Southern Africa) is now classified as “Vulnerable” by the IUCN Red List of Threatened Species.

In an attempt to curb the decline in the Pangolin numbers the South African Government appointed The African Pangolin Working Group (APWG) to oversee the rehabilitation of pangolins retrieved from the illegal wildlife trade.

The reintroduction process involves a two-phased approach. During phase one, the soft release, each individual is taken out daily over a period of 2 to 3 weeks for foraging walks. This period is dependent on the body condition and behaviour of each animal.  The animals are transported to and from their intended release site for their foraging sessions. The animals are weighed before and after each foraging session and once the monitoring teams are confident that the animals are settling, displaying normal foraging patterns and gaining weight, they can progress to the second phase of the release process.

During the second and final phase of the reintroduction, Pangolin are released into their chosen release area and monitored twice daily to check on burrow locations and times that the animals emerge from their burrows to start foraging. Daily location information is collected by SAT tags and UHF data loggers fitted to the animals’ scales. This second phase of the reintroduction and release programme can last for up to three months with weighing intervals being extended as the animals settle into their new home.

At various stages throughout the rehabilitation and reintroduction process a dedicated pangolin monitor will systematically follow each individual during foraging sessions to check on general health, movement patterns and behaviour.

The reintroduction and rehabilitation project is thus far a great success and in 2020 the first pangolin pup was born on the Munywana Conservancy. 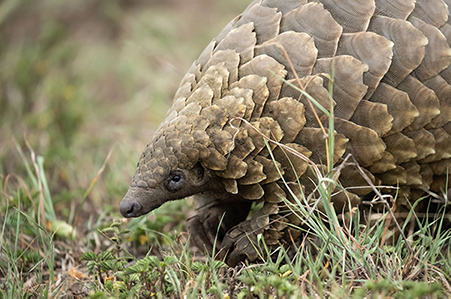