The leopard is a species that was never reintroduced into the Munywana​ Conservancy. It was widespread across Zululand and like the spotted Hyena, managed to survive the onslaught of habitat loss, decimation of food source and indiscriminate hunting, both legal and illicit for trophies and their skins.

Leopard were shot for nuisance value; with destruction permits – some questionably valid – or simply killed without any legal authorisation or recourse. This inevitably so, as conflict grew when cattle came in to the area and coexistence between humans and wildlife was challenged.

Elusive and nocturnal, only rare and fleeting glimpses of leopard were viewed during the early days of Phinda. These animals are truly wild.

The first close encounters with a leopard in 1992, Carl recounts, were tracks of a female with cubs located close to the Munywana River. After weeks of patient monitoring, devastatingly this female was found dead as a result of two old, separate, illegal snare injuries leaving her two 7 month old cubs to survive. Carl and Jerry continued to monitor the cubs over a further 2 year period before they disappeared. Carl observed that no leopard had its entire range solely within the protection of Phinda but would permeate the perimeter fence into the neighbouring cattle or hunting farms and communal areas where these animals faced multiple risks.

All this early monitoring and observations led to so many questions and hence contact with Dr Luke Hunter of the NGO Panthera to design a long term project called the Munywana Leopard Project which would launch in 2002.

This first ever major study spanning 10 years, was to investigate conservation issues surrounding leopards in northern KwaZulu-Natal. Using radio collaring, telemetry and camera trapping, a team of field biologists set out to research a number of concerns:

The objectives of the study also determined:

The results of the Munywana Leopard Project data gathered by the team of field biologists led by Dr Luke Hunter make fascinating reading and there are many scientific papers published. Read more here.

Most significantly, these results supported the Munywana Leopard Project’s 2006 recommendations to Ezemvelo KZN Wildlife on destruction permits and trophy hunting permits which have been implemented and followed as best practice procedures.

These conservation interventions catalysed by outcomes of the scientific Munywana Leopard Project have dramatically increased the number of leopard living, and viewed daily within the conservancy and reflect a healthier population thriving outside of protected areas today. 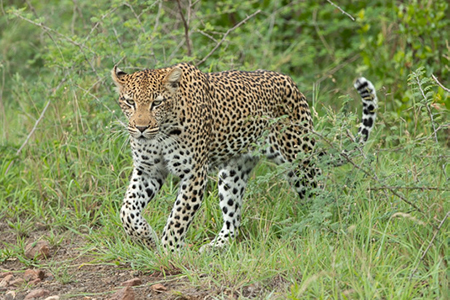