Dave Varty recounts his pitch to the family in his book Full Circle:

“Yes, we are aware that Nelson Mandela is calling for sanctions. And yes, we have bought derelict farms in the middle of northern KwaZulu Natal where the Zulu leader, Mangosuthu Buthelezi is trying to go to war with the ANC. And yes, we plan to turn these farms into a pristine wilderness. Well, almost pristine. We would remove fifty years of rusted debris, string a fence around, reintroduce the wildlife and build luxury lodges which would attract people from all over the world. Some of the foreign currency we earned would be used to help the surrounding communities, some to improve the badly damaged habitat. There would even be a little left for shareholders… an investment better than gold!”

Sounding more like a pitch for a movie concept at this point, a team of script writers could have run wild! Only, this was no writing room offering safety and neatly wrapped up endings. This was a board room assimilating a dizzying proposal that contained real risks and hopeful outcomes. It was however, a pitch that resonated with Mark and Tara’s sense and sensibilities. They agreed, it might be a costly venture, but they were prepared to take theses risks, get on this long bumpy ride, invite the family to invest in Conservation Corporation Africa* and hang on damn tight as eco-pioneers.

They recognised it would be a slow process, not just restoring Phinda, but expanding the company, its lodges, and positive ecological and social impact beyond South Africa; the process rewarding and the returns beyond anything financial. In so doing, they shared their own vision, that the natural world and its infinite importance is the most worthwhile investment that can, and should, be made.

*CCAFrica was rebranded andBeyond in 2008 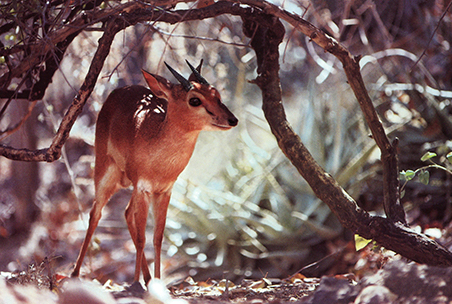