As a young boy growing up without parents in Mnqobokazi, a rural community adjacent to Zuka Private Game Reserve, life was not easy or straightforward for Musa Msweli, however, matriculating in 2002, Musa’s character, intelligences and determination created opportunities which took him on a path he loves and relishes to this day.

Working for andBeyond at Phinda Mountain, and after completing the Siyakwamukela programme, there was, in Musa’s words, a significant moment in his life when he was awarded the chance to study further through Africa Foundation’s CLEF (Community Leaders Education Fund) a bursary for tertiary education and a gateway to dreams of promising young students.

This next step as a result of CLEF took Musa to Fanshawe College, Ontario in Canada where he studied tourism and the hospitality industry for six months.

Still working for andBeyond, Musa started at Zuka Lodge in 2004 as a butler and training staff. This founded his relationship with the Getty family and his next move, to Zuka House.

Musa’s trajectory, exemplary of the successful partnership between andBeyond and Africa Foundation, with his strong desire to develop continued. Through his constant openness to learning, applying his skills and with his well respected, capable, humorous character, Musa became House Manager at Zuka House and Gladstones in 2018, a position he thrives in today, contributing in immeasurable ways to the life and soul of Zuka Private Game Reserve. 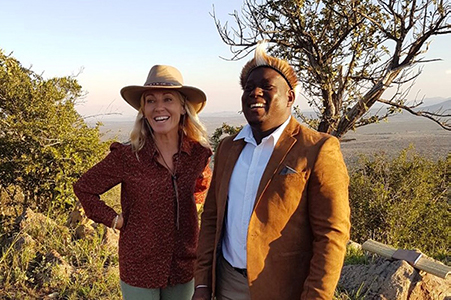