The increased pressure on rhino population in both private and state-owned conservation areas within South Africa catalysed the Munywana Conservancy management team to draw up a renewed security plan in 2015 with pre-emptive measures to reduce the risk faced by both the critically endangered black, and threatened white rhino within our conservancy boundaries.

One of the most effective measures identified, over and above increased security measures, is to remove the horn effectively making the animals significantly less attractive to illegal poaching. In 2015 this intensive and highly organised programme was initiated.

Rhino horn is primarily made up keratin, a protein found in fingernails and hair; its removal is a painless process that can be compared to trimming finger nails. Also determined, the horn removal has a limited effect on the social behaviour of the animals.

Various professionals and teams are coordinated to carry out the dehorning procedure. The identified rhino is immobilised from the air, and as the horns are removed and secured away from the property, the animal is inspected by a wildlife vet. Assisting the wildlife vet, the support team collects DNA samples and carries out ear notching to enable future identification before reversal drugs are administered; all with minimal stress or risk to the animal.

As the horn regrows, this process is repeated every 14 to 18 months which dramatically reduces the risk and instances of illegal poaching. 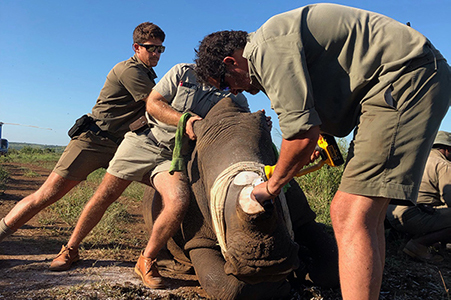